Hayma ‘Screech’ Washington has served as the Executive Producer of the CBS television show, The Amazing Race for thirteen seasons. The Amazing Race has raised the bar for reality television across the world. For his work, Washington has received seven consecutive Primetime Emmy Awards for Outstanding Reality-Competition Program. In addition, Washington received a Producers Guild Award in 2004 and has been nominated for numerous other awards throughout his career.

In his earlier days, Washington was the Associate Producer for Don Ohlmeyer Communications Company. Among his credits here were the 39th Annual Emmy Awards Show, The Comedy Store’s 15th Reunion, Motown’s Christmas Special, and several of Disney’s 4th of July Spectacular TV specials. Washington was also one of the original producers of the MTV Video Music Awards, which he produced for four consecutive years and was honored with four MTV Merit Awards. Besides these productions, he worked on numerous sporting events including multiple tournaments of the coveted Skins Game.

Washington had a 10-year stint at The Walt Disney Studios where he held the position of Vice President of Buena Vista Domestic and International Productions, where he oversaw Physical Production and Foreign Format Operations. During his tenure, he was responsible for staging and supervising remote projects for series such as Live with Regis and Kathie Lee and Siskel & Ebert, series pilots such as Debt, an award-winning series that aired on Lifetime Television; Win Ben Stein’s Money, which aired on Comedy Central; The John Salley Show, and The Keenen Ivory Wayans Show. Additionally, Washington served as Production Executive and Director of Honey I Shrunk The Kids The TV Show, produced by John Landis. He also directed presentation pilots for Buena Vista including Ben Stein’s, The List, and The Girls, featuring a Waiting to Exhale-like premise.

With this success, Hayma ‘Screech’ Washington formed his own production company, Screechers Pix. The company’s first film, The Drive, was selected by the Black American Cinema Society (BACS) to be screened at their prestigious Los Angeles showcase. Washington was the third place winner of the BACS Independent Filmmaker Award presented at the 15th annual awards ceremony held in Los Angeles, California. Washington continues to create original content for television, both reality and scripted. 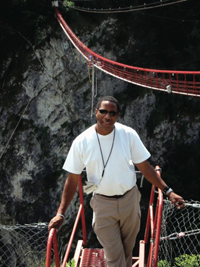